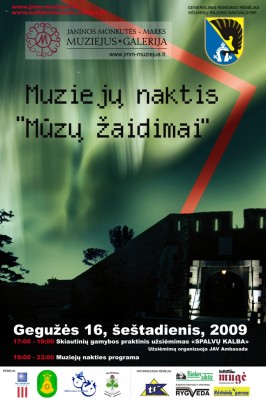 This year Janina Monkute-Marks Museum participated in the European Night of Museums for the fourth time, and introduced the exciting intercultural program, which consisted of two parts. The first part included the event of the project “American Month” organized by the American Embassy under the title “Weaving a Tale of Colors:  A Quilting Workshop“. In this event the U.S. diplomats and quilt makers Rebecca J. Dunham and Andrea S. Baker presented the quilting history and its importance to the American culture. During the workshops the participants were introduced to the art of quilt making.

The second part of the event – the night program of museums under the title “Muses Games” organized by Janina Monkute-Marks Museum-Gallery – took place in the park near the Museum. Visitors were involved. While the children indulged in playing games, the adults participated in the art workshops, listened to the live music concert held by the youth of Kedainiai. After the dusk had surrounded the city, the sky was lit up by the flying lanterns.

The event was sponsored by the American Embassy of Lithuania and Kedainiai District unicipality.