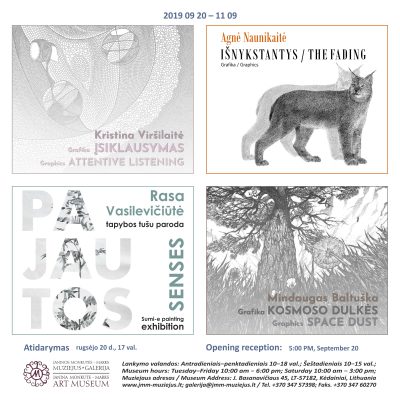 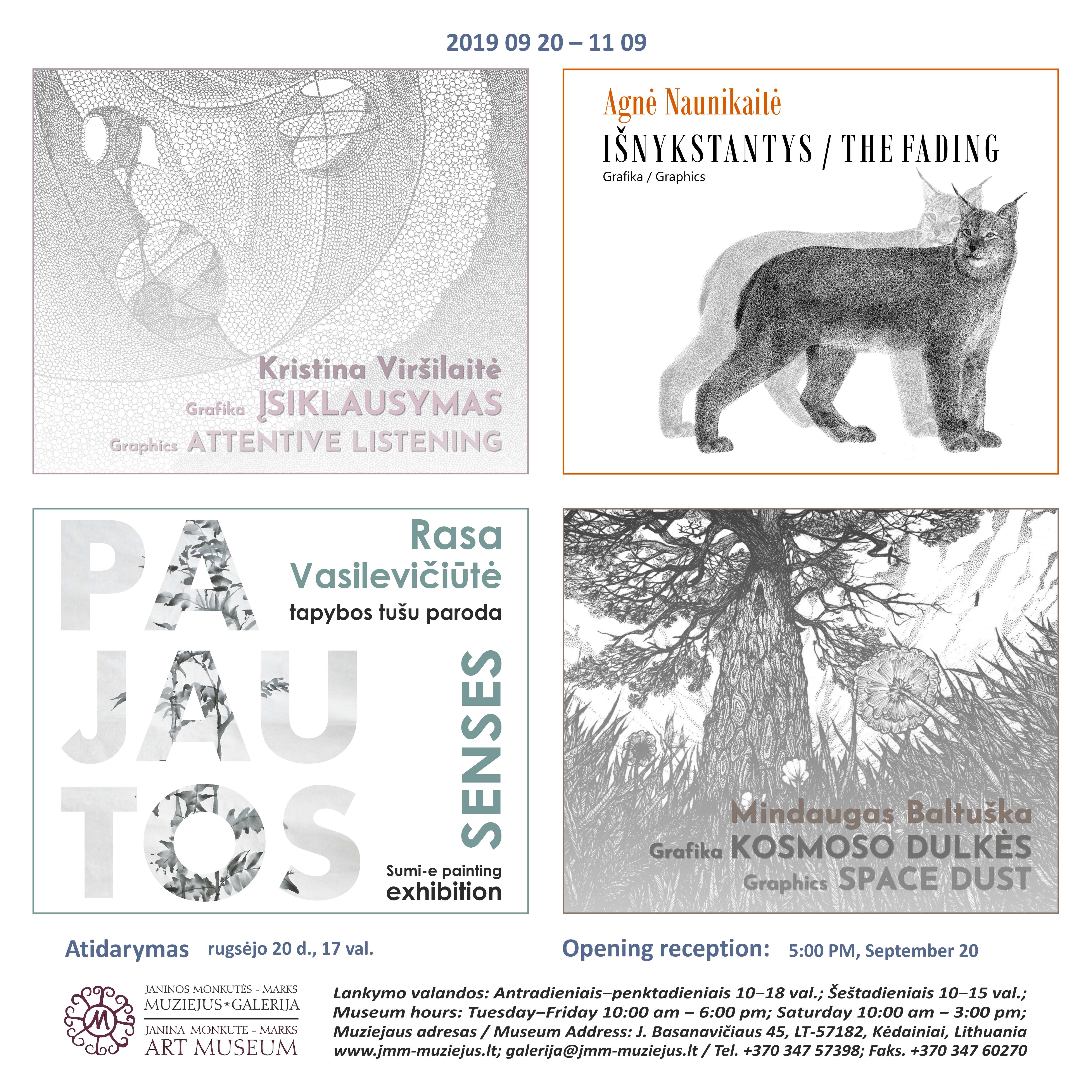 The exhibition presents works created in Japanese dry India ink on thin rice paper. Painting in India ink, Sumi-e technique, originated in China. In the 14th century, it travelled to Japan and spread to other East Asian countries such as Korea and Vietnam. Rasa Vasilevičiūtė learned this technique in 2009-2014 in the Calligraphy and India Ink Painting Studio of the artist Dalia Dokšaite, “The Way of India Ink”, and participated in exhibitions. Sumi-e is not only about ink painting but also it is very closely related to philosophy and religion. This technique, unconventional in Lithuania, requires concentration, patience, and the skill comes only after a long practice and hand training.

In the works displayed at the exhibition “Senses”, there are fragile, graceful grasses that seem to appear from under the melting snow in spring. They are so realistic that it is easy to recognize Lithuanian plants: a rowan, a wisp, a sedge, wormwood. The works are noted by simplicity and lightness, even though the technique is not simple; on the contrary, it is extremely capricious and complicated.

The artist Rasa Vasilevičiūtė graduated from Telšiai College of Applied Arts in 1995, and in 2000, she was awarded Bachelor of Graphics degree at Vilnius Academy of Arts. Since 1998, she has organized several personal exhibitions of graphic works, prints, drawings, sketches and India ink paintings in Vilnius, Kaunas, Zarasai, Panevėžys. 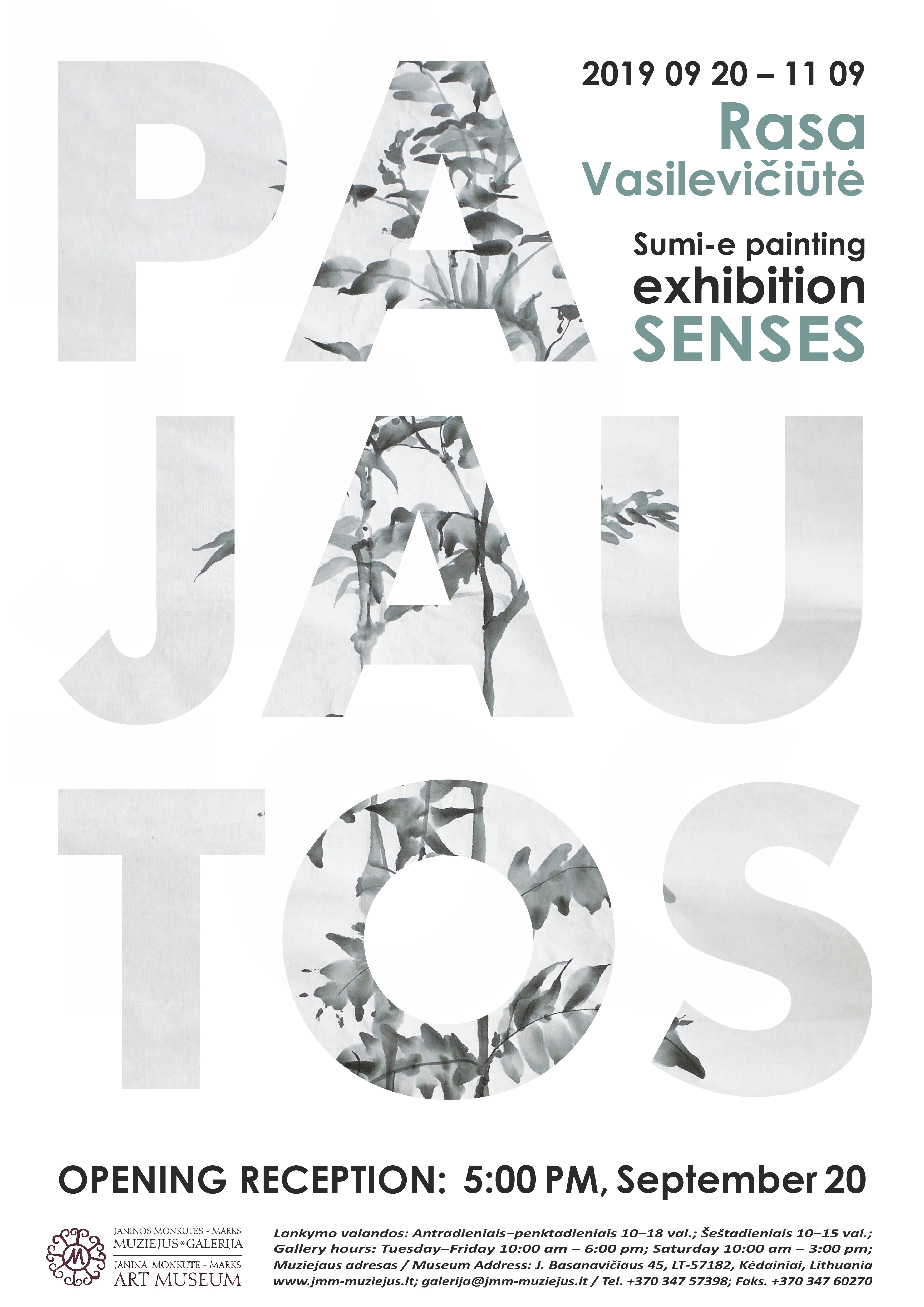 “Getting back into the place that had nothing to do with what I knew up to that point was a little weird. Weird, again… It was not easy to store everything I was carrying at that time because in the place where I was there was an abundance of tools to crop. At that time, it felt like it had to be so… “After all, having cropped everything, it would be easier to store…” I thought. This encouraged me to engage in the only real and familiar occupation – cropping. Firstly, I started to cut the edges, later I summoned up my courage and started to crop. I managed to crop to the point that the blade of the scissors was too large to cut. There were endless Dust and the World, whose wind scattered it around the places that did not exist. I was left alone with the World that seemed to have foreseen this and realizing my non-existence gave everything I needed to come to my senses cognitively. It seemed that there was no other way, and I left.

Writing everything down would take an infinite number of clock revolutions around its axis … What is an axis, what is a clock, what is infinity and how all of them can spin? This seemed to be an unsolvable enigma, but while wandering around the world and searching for dust, the impossibility to solve enigmas became a direction to nowhere. Then, with more faith in myself than in life, I walked forward.

The first step was new by faith. It was enough to think that I knew where to put my foot and I moved forward without hesitation. The second step astonished by a new sensation for the foot. Since the first step was clear by itself, I believed that the third one will explain the obscure nature of the body. A moment passed, and the steps lost ground. Knowledge remained oblivious, and the faith lost its form. As a result, the only clear and true reflection that was understood throughout the world has become nothing. All that was left was to stop.

And here it is. The clock has rotated an infinite number of times around its axis. I exist.

I exist the way that the dust once scattered somewhere exists.”

An excerpt from a traveller’s diary. 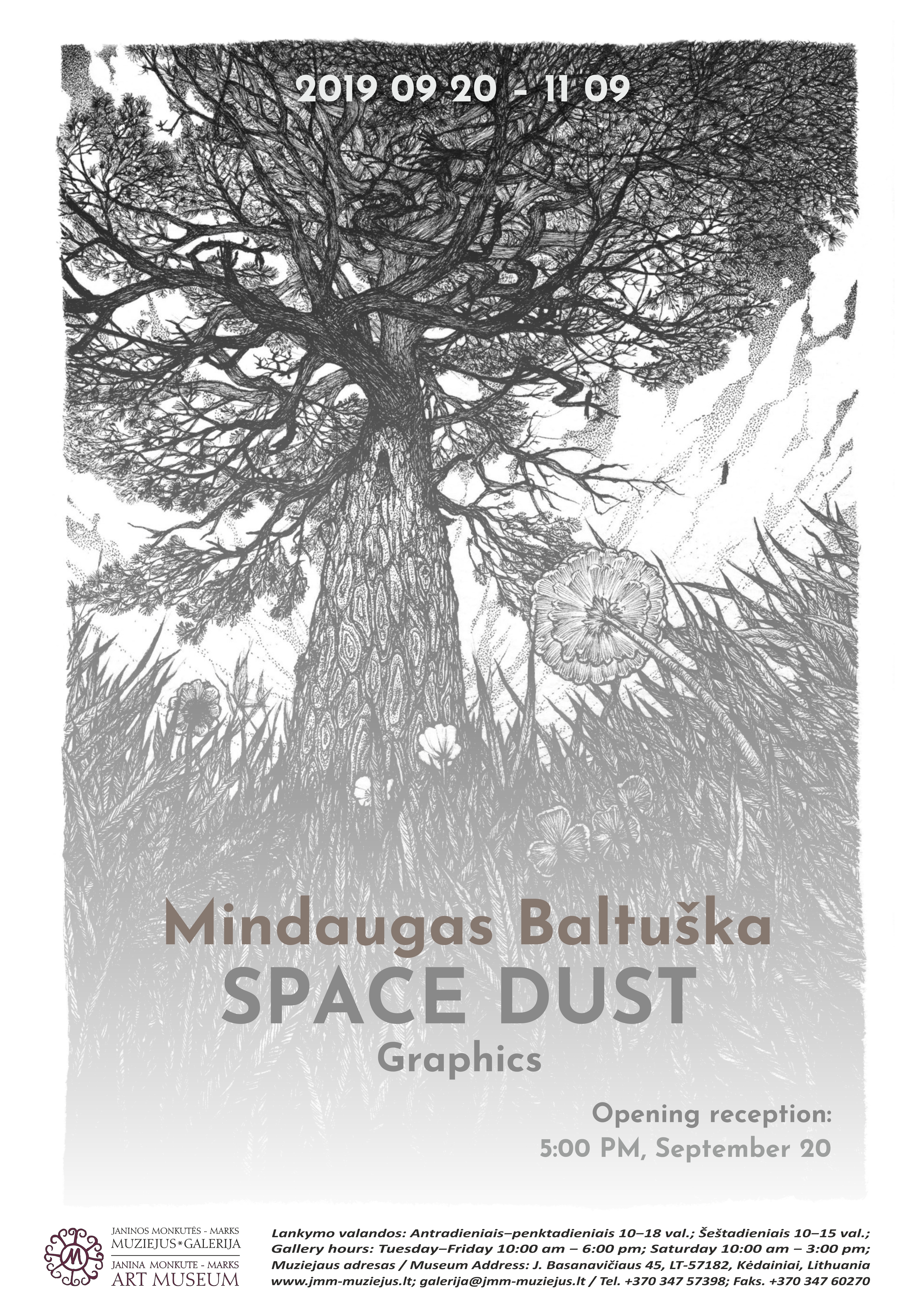 In her creation the author uses the traditional graphic technique, a graphic pen. It is a genre that does not stand urgency, it requires a lot of time and attention.
—————
Human creativity manifests itself in an uncontrolled way – through inexplicable intuition, knowing without knowledge, and ability, regardless of the knowledge acquired. Experiments, investigations, attempts to discover individual tools for expressing creative language emerged from uncontrolled and inexplicable intuition. This is how graphics became the language of the soul, a tool for expressing thoughts, feelings, emotions. It’s like trying to hold back time, breath, and rest in a world of a certain certainty that is constantly causing anxiety and doubt.

In the works of art, one encounters a restless soul that is discreetly discovered and revealed, imparting a harmonious character, form, and existence. Creativity is dominated by a continuous, repetitive, thoughtful unbroken line, which, like in the drama, manifests in a perennial struggle between our close realities, expressed through compulsive repetition of signs and continuity. The incompleteness of the lines is like a pause in the music, words between lines, attentive listening, silence and its continuity. The “musical” fragments that appear are the totality of the combination of thoughts, feelings, forms and the musical sound, the interface between the speaking soul and music. No one ever talks personally in creation, it is the topics that unite the destiny of each person. Visual and human exploration is not limited to me alone, and nothing stops with me. In creation, anxiety blends with the city, the nation, the epoch we live in, blindness/light, and the freedom of “already” or “not yet”, which hesitate to fully manifest themselves and lose everything again in fear.

The title given to each piece of art is a desire to define the direction of thought, the feeling of inspiration. However, the answer to the eternal questions remains open to anyone who appreciates. It is incomplete and continuous, frameless, and is left to be interpreted and felt as freely as we can all feel. 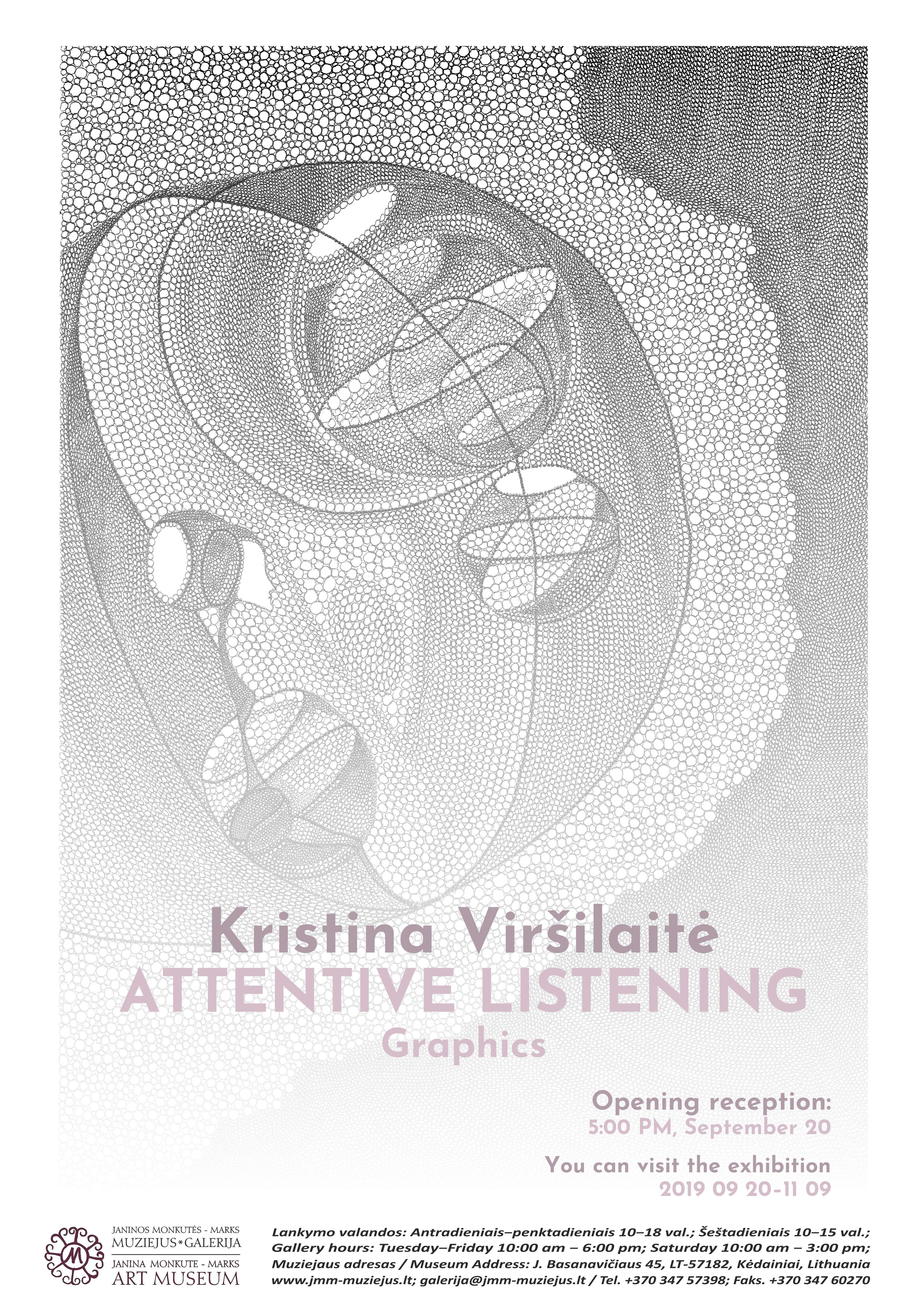 The collection named “The Fading” consists of a cycle of twelve pieces of graphics. The works depict realistic figures of animals: a fox, a winch, a lynx, a horse. All the animals portrayed are kind of single elements, from which compositions are made.

The choice of animals was influenced by the desire to make as many different compositions as possible. The format remains the same. However, the position of animals’ movements, their expressions differ. Three different compositions are created with the same animal. The first composition is rather minimalistic. On a white leaf, an animal appears with its identical reflection, a counterpart. However, the reflection, in this case, is dim, slightly blurred, and suggests an impression of fading away. Somewhere in the distance, separate details of the animal appear such as a horse’s tail or a lynx’s leg. In some works, they are smaller and in some even twice or even more times bigger than the animal itself. In the second composition, the background is made up of many small figures of animals. They are repeated with consistent accuracy, forming something that reminds of an ornament or pattern. To avoid monotonicity, tonal transitions are made, which creates an illusion of space. An animal and its lighter reflection appear on the background as well as its already mentioned element. In the third composition, an animal interacts with its reflection. They both kind of merge into a single figure. The fading part of the figure reflects a temporary, fragile nature.

All of the animals have a specific character that distinguishes them from other ones. The faces of most of them reveal a fear of waiting and anxiety. They are all vulnerable and confused.

The impression of temporality and fragility is enhanced by the white background, which balances the whole composition well. The animals are kind of walking, jumping, resting, flying in airless space, in the void. All of this can be described as stagnation, stopping the moment and repeating it several times. The created image can also be described as the animal’s desire and endeavour to stay as long as possible.

Recently, human activity has developed in such a way that it has become a threat to nature, especially animals. Scientists and researchers have estimated that every year about 0.01 – 1 per cent of all species disappear. The destructive behaviour of human beings endangers Life on the Earth. Man, with the actions and greed and no concern for anything else but oneself, has influenced the processes of nature. Our ancestors went on a hunt driven by hunger or cold. Unfortunately, even though food has become available to everyone in stores, animals are still being killed for luxury fashion (fur, bones, feathers, leather), business, souvenir production and the increasingly popular, in my opinion, creepy “entertainment” – hunting for pleasure. This is how many animal species became extinct or got on the verge of extinction.

In contemporary art, many topics are related to Man and the environment around, and the issues of the relationship between Man and Nature are discussed. It is abstract or realistic elements of landscape that are often depicted, and animal motifs are rarely found. I am very interested in the topic of the survival of animals. This encouraged to create a collection of works of art, “The Fading in Time”.

The collection “The Fading in Time” features realistic animals and hyperbolized motifs of plants and nature. It is aimed at focusing public attention on endangered animals as well as the Man who comprehends the destructive influence on everything that is live on our planet Earth. 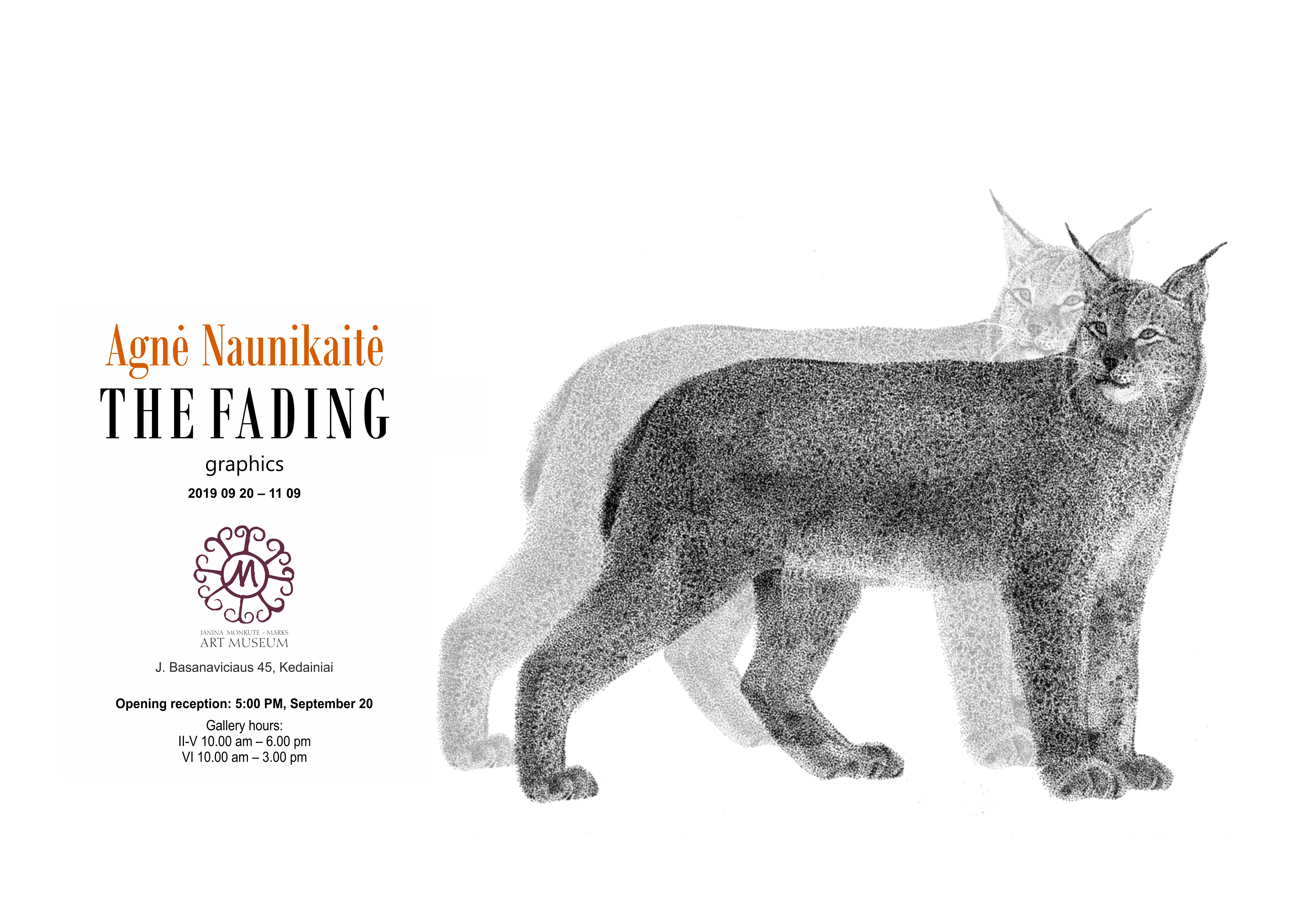